Can Police Militarization Be Justified?

Governments across the world are attempting to combat crime. The United States, and in particular, rural Oklahoma law enforcement agencies have increasingly turned towards “tough on crime” tactics including military equipment and long sentences to curb crime in their jurisdictions. Unfortunately, these tactics are extremely flawed and only serve to alleviate  specific symptoms of crime rather than actually cure the disease. This year Oklahoma  has a chance to  invest in systems  to prevent crime before it occurs, and to help heal communities across the  State. Instead of relying on over-militarization and excess sentencing, which only serve to change the geography of crime, Oklahoma’s leaders should focus on evidence-based solutions to address the root causes of crime .

Crime  has a massive impact on Oklahoma.  The state’s violent crime rate is 15% higher than the national average.  Oklahoma’s economy  loses billions of dollars annually to the cost of crime.  Like leaders in states across the country Oklahoma leaders have been scrambling to find solutions to lower the crime rate.  One of the most common solutions, which has been used extensively in Oklahoma, is to raise sentence lengths in an effort to deter crime. There is no statistical evidence that longer sentences have worked to reduce crime, when for example,  Kansas has a shorter median sentence length for common property crimes than Oklahoma and yet Oklahoma has higher crime rates in nearly every category. Our neighboring states have invested more in mental health and substance abuse treatment while Oklahoma has chosen to invest in state prisons. This has left our prisons filled to capacity with older and sicker Oklahomans who pose little threat to public safety. It also leaves few resources dedicated to preventing victims from being harmed in the first place. This failure on the part of our State Government has forced many local governments to attempt to invest in crime reduction themselves, usually turning to increased investments in policing.

The Militarization of Police Forces

One common investment in local law enforcement is to acquire excess equipment from the various military branches under a program termed the “1033 Program.The 1033 Program is an effort by the Federal Government to assist local law enforcement by supplying excess military equipment in an attempt to combat crime. Since the inception of the program in 1996, local law enforcement agencies have received over 7 billion dollars worth of military grade equipment. Oklahoma alone has gotten over 27 million dollars in equipment including a mine resistant vehicle for Okmulgee City, a vehicle mounted turret for Bartlesville, and a fixed wing aircraft for Canadian County, just to name a few. These transfers show how local governments have prioritized an aggressive “tough on crime” approach. They are spending limited time and resources acquiring armored trucks and military rifles instead of mental health treatment and de-escalation training. The Oklahoma Department of Mental Health and Substance Abuse Services estimates that over 100,000 Oklahomans currently eligible for state provided services are not receiving them, and that the current funding levels only allow 1 in 3 of those in Oklahoma to get the care that they need. These budgetary decisions have robbed those struggling with mental health and substance abuse a chance at becoming productive citizens and instead have treated our cities as a warzone.

Militarization is Not an Effective Crime Reduction Strategy

The militarization of Oklahoma police forces has proven to be ineffective at truly combating crime. Instead this excess equipment merely moves crime around geographically while creating a run-away train in some police departments that have become unnecessarily and overly militarized. For example, one study shows that for every dollar per capita of military equipment acquired the violent crime rate drops around 7%. This would be a major accomplishment – but unfortunately this drop is merely fool’s gold, because there is a corresponding 2% rise in violent crime in neighboring areas. This effect shows that increasing militarization does not deter crime, in the sense that it does not stop potential criminals from committing crimes, but rather displaces crime, simply sending criminals to less militarized areas.

As an example, the Shawnee Police Department, which had a budget over $10 million in 2021, received 1.3 million dollars worth of military equipment by 2015. Just 5 miles down the highway from Shawnee is Techumsah, Oklahoma, whose police department had a budget of just over 1 million in 2021, and had received just under two thousand dollars worth of military grade equipment by 2015. 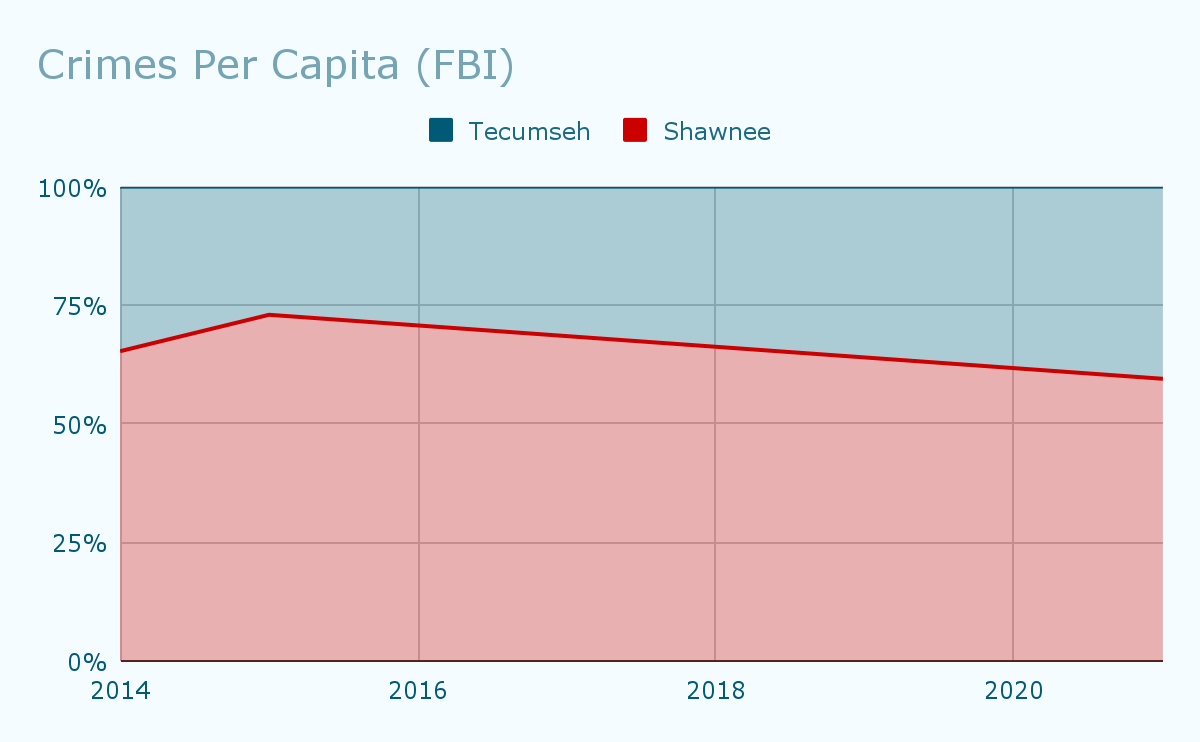 As the chart above indicates, since the introduction of military grade equipment into the respective police departments in 2015, the instances of crime in Shawnee have declined by 31%. However, just a couple minutes down the road, in Tecumseh, with much less military equipment, has seen a rise of 25% in the total incidences of crime. This example just highlights how militarization does nothing to combat crime but rather just moves it geographically to areas with much less militarization.

This movement of crime has two different direct effects on our State. First, it funnels crime to areas with the least amount of resources to combat it. As is the case of Tecumseh, who has roughly one-tenth the budget of Shawnee, but is feeling the effects of increased crime due to the actions of a neighbor. It also allows the Shawnee Police Department to never see the negative effects of increased militarization and only see the crime reduction benefit in their jurisdiction, creating an incentive to over militarize, and keep stocking up on heavy weaponry despite decreasing benefits. Finally, and ultimately predictably, military grade weapons increase police violence resulting in more civilian and dog deaths at the hands of law enforcement. For example, Oklahoma County and Tulsa County both have much higher per capita police violence rates than the national average.

State Question 780 and 781 provides an alternative solution. In 2016 the Oklahoma voters decided to make certain low level drug and property crimes misdemeanors instead of misdemeanors and then funnel the savings in reduced incarceration into county level mental health and substance abuse treatment services. However as of 2023, these funds have never been allocated to the counties. Rural counties can’t afford lifesaving treatment resources and diversion programs, and the larger counties desperately need funding to increase the capacity of services like drug court and mental health court. Treatment has proven to be effective at lowering future arrests and generating savings while potentially ending generational cycles of criminal legal contact. Giving these funds to the counties, as the law requires, would give   rural jurisdictions a chance to fight crime before it occurs, and allow police departments to focus on stopping crime rather than being a first responder during a mental health crisis. Funding mental health and substance abuse treatment is an elegant solution that simultaneously decreases incarceration while also increasing public safety   by attacking crime before it occurs.

What Does This All Mean?

Putting military grade equipment into local law enforcement hands does nothing to actually fix the underlying causes of crime but rather forcibly moves crime to less resource rich jurisdictions, as well as making civilians less safe. SQ781 funds offer another vision and a potential solution by attacking crime before it occurs by treating the underlying psychological and social causes of crime. Truly being tough on crime means lowering crime rates and SQ781 funds have been proven to be effective at doing just that.